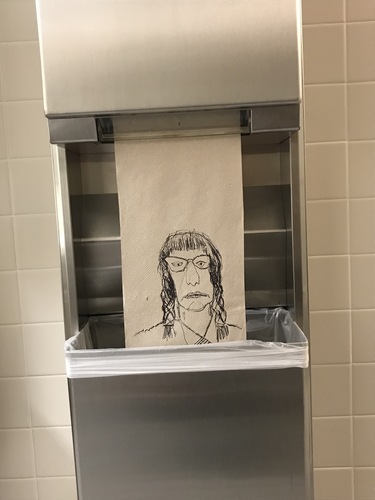 I work in a variety of media because the art I make is about my whole life and the many people, places, and things I encounter that pique my curiosity and imagination. Large- scale drawing, sculpture made from found objects, photography, video, children's arts and crafts, and short performance are all part of my personal arsenal that helps me bring to life artwork that’s in an ongoing conversation with my everyday existence: to make what’s invisible visible--to myself and to others.
﻿My formal introduction to art began in Cambridge, Massachusetts at the Cambridge Center for Art Education with a figure drawing class purchased for me by a friend for my birthday. This class ignited in me a passion for drawing, which then opened a whole new creative world. Encouraged to pursue a more challenging course load by my teachers, I subsequently matriculated as a full-time day student at the School of the Museum of Fine Arts. There I studied with Annette Lemieux, Mag Harris, and David Kelly, who each conducted frequent critiques, effectively helping me connect concepts with language and materials. Nonetheless, despite the many things I learned there, my art practice is mainly self-taught and my influences wide ranging.
﻿Currently Emilie keeps a studio in Red Hook Brooklyn that she’s had for over 15 years. Her full-time day job as a security guard at the Metropolitan Museum of Art for the past 28 years has also been another source of inspiration, leading to the creation of a series of autobiographical works and bodies of works based on her life as an museum security guard there--first in 2010 with the construction of a life-size doll of herself she dubbed "Emilie Doppelgänger", which Emilie, the creator, was then photographed interacting with her created double in a series of photographs taken by her partner Nick Rowan. Subsequent to that project, which took place over several years, she embarked on another long-term, playful, and at times irreverent photo series about the many facets and guises of her work life titled "On Break: Random Acts of Defiance in the Workplace", and has also created work based on her job for the Met's recurring employee art show, often held annually or biannually, out of recycled materials such as late-notice tickets she and her co-workers had received when late to work (pieced together into a giant paper airplane), dry cleaning bags from serviced uniforms (as part of a monumental sculpture celebrating her 50th birthday and an upholstered chair titled “Ceremonial Sit Down Throne “ Commemorating 25 years of standing guard ), and most recently in June of this year, a large fabric piece made from recycled Met security guard uniforms, dedicated to the entire Met staff, appropriately titled "Anthem". Emilie has also been featured in Netflix's 2021 series "Worn Stories" in which she talks about her love for her uniform and how it helps her do her job. Other recent projects include a campaign for greater wage transparency at the Met, for which she created buttons for her co-workers showing the number of years they have worked at the Met alongside their hourly wage--which earned her a write-up in the New York Times describing her somewhat controversial pathbreaking project as well as her art and life as a Met security guard.